Cauliflower & Stilton soup from my book Home Made

A little giveaway on this dreary Tuesday morning. Rain is falling down like you’ve never seen before here in Amsterdam. A perfect day for a bowl of hot soup, I thought…

My culinary friend Karin Luiten, also known as KOKEN MET KARIN featured this recipe from my book on her website last week, but it’s in Dutch. So I’ll translate it it in English for you, here it comes: 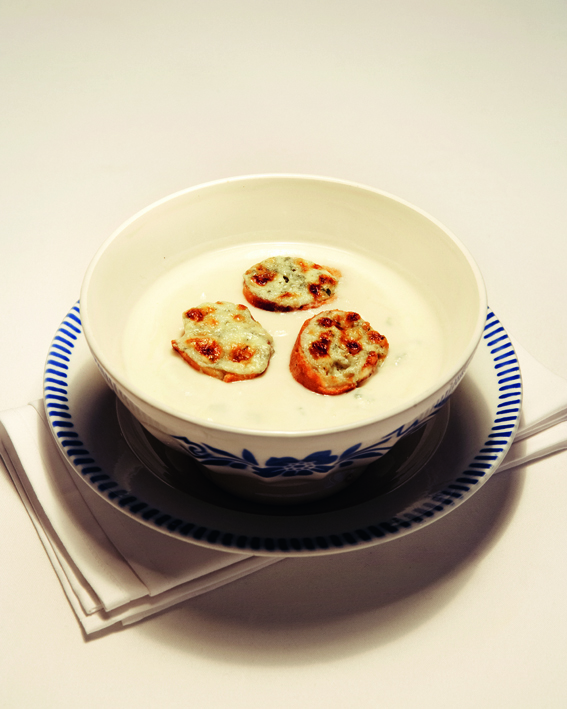 Fry the onion, celery and cauliflower in the butter over low heat until the celery and onions are soft. That’s after about 10 minutes. Pour the broth and milk in and cook gently for another  20 minutes, do this over low heat just until the cauliflower is cooked. Puree the soup in a blender until smooth. Mix the cornstarch with extra 2 tablespoons of milk, pour it in the soup and let it come to a boil.

Now make crostini: Cut the bread into thin slices (beware, the bread can break easily). Preheat the oven to 180 degrees. Mix the oil with the garlic and lots of salt and pepper. Heat it one minute in the microwave or in a little saucepan, so the garlic-oil will get a stronger taste, and pour it over the bread slices. Toss gently, put them in the oven and bake them nice and brown in a few minutes. Remove from oven to cool slightly. Turn the oven on to the grill setting. Crumble the Stilton over the crème fraîche. Stir well and spoon a tablespoon of the mixture on each crostino. Grill them for 2 minutes until golden. Lay two or three of them on to each bowl of soup and serve immediately.